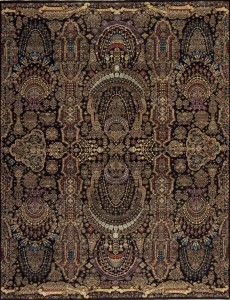 Okay, maybe the question isn’t that old (especially when compared to how long oriental rugs have been around), but there is a lot of debate among rug collectors. Many are adamant that old oriental rugs are far superior to new ones. While old rugs are wonderful, it’s a bit misguided to write off all new ones.

First and foremost, it’s a stretch to say that because something is being sold for profit, it isn’t art. You’d be hard-pressed to find a painter that doesn’t want to sell their artwork for profit. So why are oriental rugs thought of differently? Although many older rugs served a functional purpose, they were also sold in marketplaces for profit.

Yes, many new rugs are copies of old ones. There are also many that draw inspiration from old rugs while tweaking some aspect—minor or major—to create something new. Not only that, but traditional village rugs are “traditional” because they are a copy of a copy of a copy. Traditional designs have always been passed down and recreated.

This is also true. As rugs age, the colors become more harmonious and the wear and tear that comes with use adds character. However, it’s also possible to age new rugs. Although this could be seen as “cheating,” consumers who love the look of old rugs are getting all the character of an old rug without the massive price tag (and the rug is brand new which means it will last much longer than one that’s actually old). There are also plenty of old rugs that look almost new because they’ve been used as wall hangings, or were put in rooms where they were barely walked on. Not to mention, all old rugs start off as new rugs.

Of course, in the grand scheme of things, oriental rugs are a matter of personal preference. If you hate new rugs, that’s okay. And if you hate old rugs, that’s okay too. When buying an oriental rug, the most important thing is that you like it, because (as we’ve said many times), it’s an investment that will last you for many, many years.

At Ageless Rug Treasures, we feel that we offer the[...]